Remcos is a legitimate commercial Remote Access Tool (RAT) created by the security company Breaking Security. It was first released in 2016 but started being used for malicious purposes during 2017.

This is a powerful tool that grants the capability of comprehensive remote surveillance including keylogging, activating cameras, taking screenshots, capturing audio, and monitoring clipboard activity. It allows threat actors to quietly transfer files to and from the client machine, execute scripts, create shells, list all installed software, edit registry and more. Basically, a hacker’s dream.

Widely used by malicious actors, this tool is mostly delivered via phishing campaigns. While just last year an analysis of version 3.4.0 was published by Fortinet, we recently observed version 4.2.0, which was released in December 20, 2022 , being used by threat actors.

The Remcos dropper sample we investigated was an NSIS installer file, with a free icon (probably to make the malware more attractive for the victim):

During installation, three files are dropped to the victim’s %temp% folder:

luxdclttdd.exe decompresses the Remcos payload and injects it into a new instance of itself by using the Process Hollowing technique. However, unlike most Remcos samples in the wild, this one implements this technique differently, in a way allows it to bypass security solutions. In general, there are several ways to  perform the Process Hollowing technique. Our sample uses a process hollowing variant which usies NtCreateSection + NtMapViewOfSection + ResumeThread with a small twist: the API calls mentioned above were switched to direct syscalls – to bypass detection .  Therefore, the Process Hollowing implementation in our case includes the following API calls: 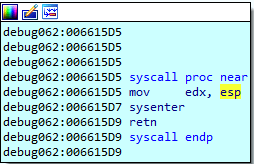 The NtCreateSection and NtMapViewOfSection API  are used to implement another  known but less frequently used memory injection technique. By changing part of the API calls and using direct syscalls, this implementation of evasion techniques like Process Hollowing is likely to confuse and bypass security products that rely on a specific set of API calls for detection. Last year we observed a BlueStealer loader implementing a similar technique.

When building a Remcos agent, the threat actor can enable a privilege escalation capability, which Remcos performs in two ways:

Eventvwr.exe (Microsoft’s Event Viewer) is a tool used to view application and system logs for monitoring and troubleshooting. Event Viewer needs to execute mmc.exe (Microsoft Management Console, which serves as an interface for Windows administrative tools) to work. To do this it queries two registry keys, one of which is the registry key added by our malware. So, by changing the registry key, our malware causes Event Viewer to execute it, instead of MMC. When executed by Event Viewer, the child process (the malware in our case) will inherit its privileges. Its worth mentioning that this technique was discovered in 2016 and fixed by Microsoft in 2019.

Minerva Armor’s Anti Ransomware solution inherently prevents memory injection and process hollowing techniques before they can make any progress. This effectively stops Remcos RAT in its initial stages before any damage was made and before the threat actor could gain any access to the machine. This is also how we were able to locate and analyze this sample.