Microsoft includes “Windows Defender” in names of several security capabilities that the company provides. In discussions with Minerva Labs customers and partners I’ve witnessed frequent confusion regarding the role that these technologies can play in an enterprise security architecture. What benefits do they offer? Which ones are included in the base operating system? What are their dependencies?

Below is my attempt at untangling the “Windows Defender” naming mess. If you’re impatient, scroll down to the end to see the table that summarizes all the names and capabilities. Note that I’ve assembled these details after carefully examining and interpreting Microsoft’s public documentation. If you notice any errors or omissions, I’d love to hear about them via Twitter or our contact form.

Windows Defender Advanced Threat Protection (Windows Defender ATP) is a commercial product from Microsoft “that enables enterprise customers to detect, investigate, and respond to advanced threats on their networks.”[6] It competes with third-party solutions that offer Enterprise Detection and Response (EDR) capabilities, focusing on scenarios where preventative measures may have failed and allowing the organization to detect, investigate and contain the incident. It also offers visibility into the data reported by other compatible Microsoft security products. Windows Defender ATP requires the higher-end Windows Enterprise E5 license. It can capture data from endpoints running Windows 10 version 1607 or later, Windows Server 2016, Windows 7 and Windows 8.1[7] as long as the customer purchased the appropriate license and potentially from other platforms.

Windows Defender SmartScreen is a free feature of Windows 10 designed to prevent end-users from accessing known malicious websites or opening suspicious files downloaded from the Internet.[8] Windows 10 prior to version 1703 called this feature SmartScreen Filter and Windows SmartScreen.

Windows Defender Application Control (WDAC) implements application whitelisting, “restricting the applications that users are allowed to run and the code that runs in the System Core (kernel).”[16] WDAC can also limit capabilities of unsigned scripts. Enterprises can enforce WDAC policies on any edition of Windows 10 and Windows Server 2016 without additional licensing; the creation of policies requires Windows 10 Enterprise, Windows 10 Pro or Windows Server 2016. Prior to version 1709 of Windows 10, this feature was known as Windows Defender Device Guard configurable code integrity policies. Some aspects of WDAC overlap with AppLocker,[17] which is another application whitelisting technology from Microsoft; it works on Windows 10, Windows Server 2016 and some older OS versions.[18] Microsoft recommends deploying WDAC “at the most restrictive level possible” and then using “AppLocker to fine-tune the restrictions to an even lower level.”[19]

Windows Defender Device Guard utilizes hardware and virtualization technologies to “isolate the Code Integrity (CI) decision-making function”[20] from the rest of the OS to mitigate against exploits and help ensure integrity of kernel-level code.[21] This feature is available on Windows 10 and Windows Server 2016 without additional licensing requirements. It relies on Hyper-V Code Integrity (HVCI) functionality,[22] which is an implementation of Virtualization-Based Security (VBS),[23] and is incompatible with other hypervisors, such as VMware Workstation and VirtualBox.[24] It also has other hardware requirements, such as the need for the Trusted Platform Module (TPM).

Windows Defender Firewall with Advanced Security (WFAS) is the host-based firewall built into Windows 10 and Windows Server 2016.[26] Earlier versions of Windows referred to this capability as Windows Firewall and, potentially, lacked some of the functionality available in newer versions of the OS. WFAS can control network traffic going to and from local applications. It also supports IPSec for securing network connections.

Windows Defender System Guard refers to OS components that protect the integrity of key aspects of the operating system, starting from boot-time.[27] Microsoft began using this name in Windows 10, version 1709. This free feature relies on the Trusted Platform Module (TPM) chip and Secure Boot technology.[28] It utilizes a hardware-based root of trust to validate that the firmware, the bootloader, the Windows kernel and other critical OS components have not been modified.

Windows Defender Application Guard isolates Internet Explorer and Edge instances when browsing untrusted websites [29] in “a temporary, contained environment.”[30] This feature is supported on 64-bit Windows 10 Enterprise, version 1709 or higher, and Windows 10 Pro, version 1803 and higher. To implement the sandbox around the browser, it relies on Hyper-V and CPU virtualization extensions.[31] It’s not supported within virtual machines or in VDI environments, and it is incompatible with other hypervisors, such as VMware.

To better understand the way in which Microsoft’s various Windows Defender technologies fit into an endpoint security architecture, read our whitepaper on the topic.

“Windows Defender” Technologies at a Glance 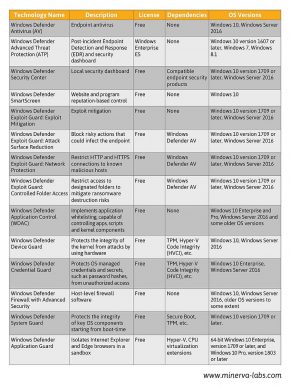 Minerva Labs’ Anti-Evasion Platform stops threats that bypass other technologies, including traditional and “next-gen” antivirus. We do this without overlapping with the existing endpoint security approaches, since Minerva’s unique capability is to deceive malware in a way that causes it to disarm itself. We work alongside other endpoint security approaches, be they Windows Defender Antivirus and related measures or Endpoint Protection Platforms (EPP) solutions. I found it helpful to explain to customers the nature of security mechanisms they can obtain from Microsoft, so I can clarify the gap that our solution covers on the endpoint.

[1] What is Windows Defender?

[18] Requirements to Use AppLocker

[24] Virtualization Applications Do Not Work Together with Hyper-V, Device Guard, and Credential Guard